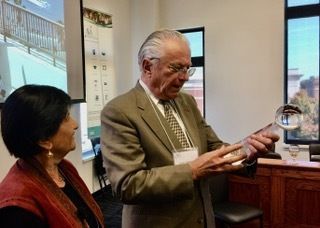 David Chadwick, MD worked with Henry Kempe, MD as a medical student/intern in 1949 at UCSF.  He went on to join LA Children’s as a faculty pediatrician where he was recruited into looking at child abuse by Helen Boardman, MSW, the same social worker who served with Roland Summit, MD on the founding board of Parents Anonymous.  Dave left LA Children’s to become the first employed physician/pediatrician at San Diego Children’s Hospital and rose to become its Medical Director first Chief Medical Officer before leaving hospital administration to focus on founding its Center for Child Protection.  Dave built that Center and joined in founding the American Professional Society on the Abuse of Children in 1986.  He served as APSAC’s second President and was integral to developing the multidisciplinary field addressing child abuse and neglect.  He served as the Chair of the AMA’s National Advisory Council on Family Violence and after his retirement from San Diego Children’s Hospital, worked half time for the Department of Pediatrics at the University of Utah and Primary Children’s Center for Safe and Health Families in Salt Lake City.  After leaving his position in Salt Lake City, Dave suffered a major stroke that left him with a deep left hemiparesis.   He then learned voice transcription and authored the Child Abuse Doctors. Within the last few years, Dave became disappointed with the commercialization of peer reviewed journals. He developed the Cooperative Scientific Knowledge Exchange (CSKE) whose mission is to develop a system for the dissemination of scientific knowledge about violence and abuse at the lowest possible cost, sharing copyrights with the authors.  CSKE is now a program of the AVA and will be producing an electronic periodical called Maltreatment.  The Center he founded at the San Diego Children’s Hospital, now Rady Children’s Hospital, is now named the Chadwick Center and has continued to sponsor one of the world’s foremost annual child and family maltreatment conferences each January for over 30 years running.